In addition to our annual Reunion each spring, PDS/USN alumni regularly return to 2000 Edgehill to learn about how the school is evolving and how they can continue to push its progress forward. The Alumni Board is composed of local alumni living in Nashville and meets quarterly. The National Alumni Board of Visitors (NABV) is a collection of alumni from across the country who visit campus each fall for an annual meeting. These alumni serve as ambassadors to share updates with fellow alumni in their home cities, and to help the school host regional events throughout the year. 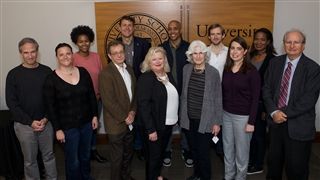 The Distinguished Alumni Award was established in 1978 to honor a graduate of PDS/USN who has made outstanding professional or civic achievements on a local, national, or international level. Recipients have included authors, educators, researchers, musicians, and volunteer leaders. In addition to honoring these individuals, the award brings them to the attention of the PDS/USN community and the city at large. Their accomplishments serve as an inspiration to students and graduates and as a reminder to the citizens of Nashville of the high-quality education that has long been a tradition at our school.

Nominations for future recognition are encouraged and should be addressed to Alumni Director Leigh Ivey Hicks '05, 2000 Edgehill Avenue, Nashville, TN 37212.